The popularity of inflatable boats and kayaks are dramatically increasing in recent years and many types of inflatables have been developed. So what exactly each type is? Hopefully this article could answer your question by going through each type of inflatables that Innovocean provides.

When we talk about inflatable boats, most of them consist of inflatable tubes and bottoms (or hulls). Inflatable boats are sorted by the materials used in bottoms and tubes, as well as the position of the tubes.

There are two major types of materials used in tubes, which are PVC and Hypalon. The pros and cons of these two are not covered in this article because they have much to talk about.

The position of tubes is not hard to understand. Most of the inflatables look like normal boats. They all have inflatable tubes surrounding port, bow and starboard side. They all have a transom stern which can be attached with an outboard engine. The only thing look different is the bottom of the boat. However, there are always some types not usual, such as inflatable rafts, multi-hulls and inflatable kayaks.

The most important criterion for sorting inflatable boats is the bottom (hull) design. In general, there are two types of hulls. One is known as the rigid hull, which is usually V-shaped and is not foldable. The other type is soft and can be rolled up into a carrying bag. It usually has hard deck plates which can be removed. Those deck plates vary from material to material. Each type of material has its own advantages and disadvantages. They will be introduced in the following descriptions.

Rigid-Hull Inflatables can be made very large when comparing with other types of inflatable boats. But still we should know the fact that all inflatables are designed to be small, fast, stable and short-ranged vessels. Some of the large RIBs are over 12m long and can hold more than 20 people. They have V-shaped hulls and look like normal non-inflatable boats. The only difference in appearance is that they have inflatable tubes on their gunwale. However, these tubes make a lot of difference in performance of the boats, including increasing stability and capacity. For more advantages and details, please refer to the article “Why Inflatables” on this website.

Most of the people use small RIBs as dinghies for their large vessels. These RIBs are usually no longer than 40 feet, which can hold 5 to 7 people at most. One advantage of RIB dinghies over other boats is that we can install consoles and luxury seats on RIBs. These consoles and seats are usually screwed and welded with the rigid hull of the boat. That is also one reason why non-rigid-hull boats cannot have consoles. Some inflatables, such as aluminium deck or wooden deck models, have hard decks but their bottoms are usually a single layer of PVC. Over the years, many people have tried themselves to install consoles and seats on the floor plates but the outcomes do not go well. The reason is that drilling holes on the floor plates may cause the plates to crack and the plates can no longer be removed from the boat, which is against the design of the separable deck. Therefore, if you want to steer the boat like a car, a RIB is your best choice. Even a 2.5m RIB can have a console.

Although many brand-new or second-hand boats have consoles already installed for you, it is always a good idea to buy a RIB and a console separately. In this way, not only you can look for something on sale, but also you can choose the style you like. Many brands provide with console installation service.

RIBs are heavy and not foldable. When talking about weight, fibreglass RIBs are really heavy. A fibreglass RIB is usually 25% heavier than an aluminium deck inflatable boat with the same length, not including the console. Boat owners usually use elevators or pulleys to lift their RIB dinghies. The newly designed aluminium RIBs are much lighter. Some small models can even be carried by one man. They are ideal dinghies, too. However, all RIBs cannot be folded, which means you cannot roll up a RIB and put it into the trunk of a car, like other inflatables. You will need trailers or towing wheels for the RIB if you want to transport it by a car.

Finally, one last comment about RIBs: they can go really fast. They can go over 50 km/h (40 miles/h). They have V-shaped hulls instead of flat hulls, which mean that they can break through waves more easily. Their weights also make them adapt to heavy engines and heavy engines mean more horsepower. 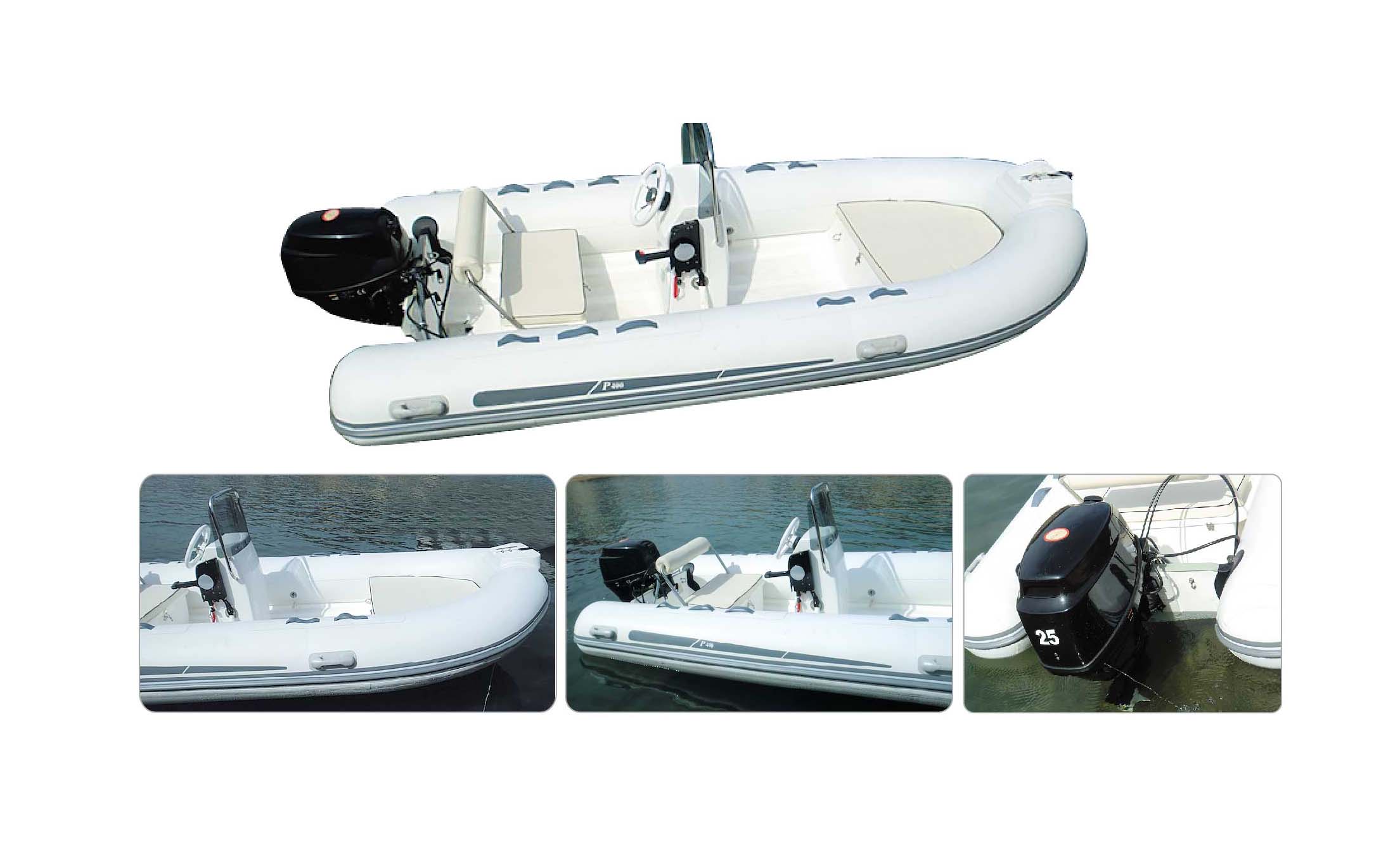 The air mattress deck inflatables are boats that mostly made up with inflatable chambers. They look like normal non-rigid-hull inflatables. An air mattress model has a soft PVC bottom and a sheet of inflatable deck. The keel is also inflatable for most of the types. You may want to inflate the keel and the mattress as rigid as possible.

As one benefit of the comfort of the air mattress, you can remove the seat and sit on the air mattress. It is even possible to bring a sleep bag and sleep on the boat. Just feel like a bed. Therefore, it is a good idea to hang out with 2-5 friends on an air mattress inflatable.

Air mattress deck inflatables are extremely light and easy to carry with. They are designed for convenience anyway. So you cannot add some parts or accessories like a console on it. Air mattress inflatables are ideal for home-based usages. You can put it into a car and install it easily when using. They can be used as dinghies but they are not the best choice.

Air mattress inflatables cannot be made very long (usually shorter than 3m). They are not capable of large engines (less than 8 HP) so they may not go very fast.

One remarkable feature is that air mattress decks are really cheap. You may get a 270cm-long air mattress inflatable boat with no more than 1000 dollars. 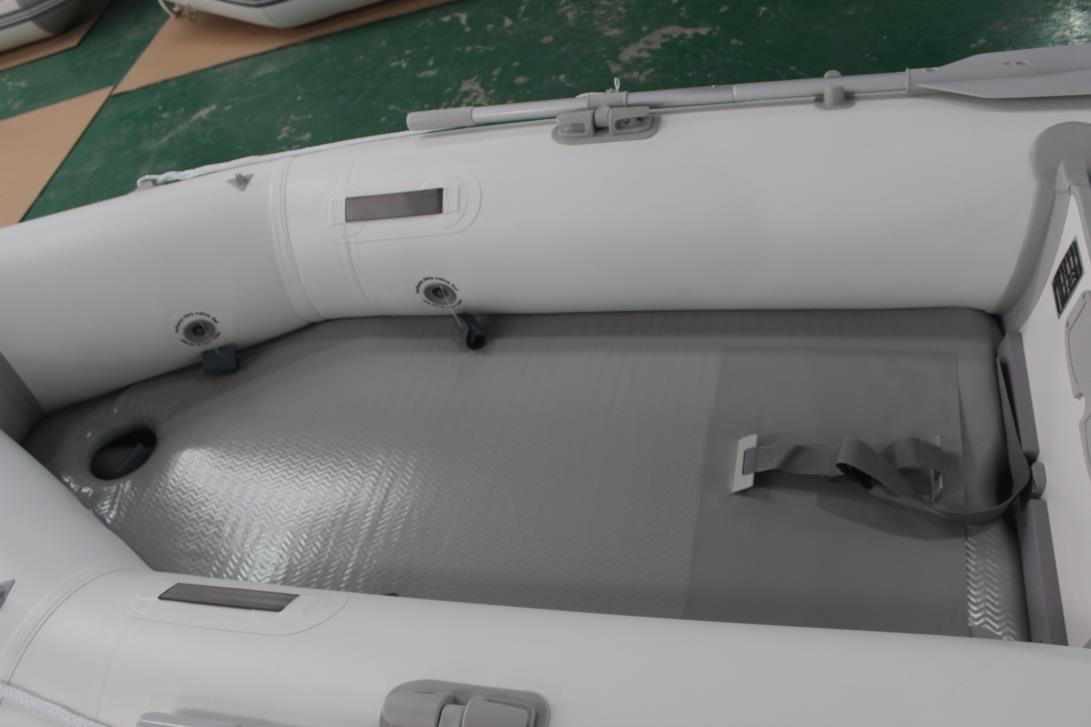 Aluminium deck inflatable boats vary in size, from 230cm to 470cm. They are general purpose small boats that are capable of doing anything.

An aluminium deck consists of 3 to 4 separate floor plates. Their edges can lock with each other and make the whole floor hard and flat. Aluminium side bars are used to fix the floor in the room between the inflatable tube and the bottom. Therefore, just like air mattress decks, the aluminium floor can be taken away and the hull can be rolled up into a single carrying bag. This feature makes the aluminium deck inflatables easy to be transported. However, it requires more efforts to re-install the boat.

If you do not want to tear down the floor every time, you may also put the boat on a trailer or use it as a dinghy. It actually requires less maintenance than a RIB with a console. Aluminium deck inflatables are heavier than air mattress deck types. They are capable of larger motors. Innovocean’s “ME380” aluminium deck IB can hold a motor with 25 horsepower.

One fact that contributes to the popularity of aluminium boats in recent years is the environmental benefit of aluminium alloy. The aluminium alloy floor plates are durable and completely recyclable. They have longer life cycles than the boat hulls.

Innovocean’s manufacturer offers the unique “VIB”. “VIB” means “V-shaped Inflatable Hull Boat”. A VIB’s hull is entirely inflatable (except the transom). The hull is V-shaped, just like a RIB’s hull. It has two independent inflatable chambers separated by the central line from the bow to the transom. An inflatable keel lies on the top of the inflatable bottoms. It fills up the valley of the V-shaped hull to create a flat deck.

VIBs are extremely light-weighted, which means they have advanced load capacity on the water. Each VIB is able to hold one more person than an aluminium deck inflatable with the same size. Their light weights also make them easier to be carried on land.

VIB has the “roll-up-and-go” feature. You do not need to install any deck or floor plates. Just inflate or deflate the chambers and you are ready to go. Therefore, VIB is suitable for home-based usage or independent boating. They are much easier to maintain even than air mattress deck inflatables. 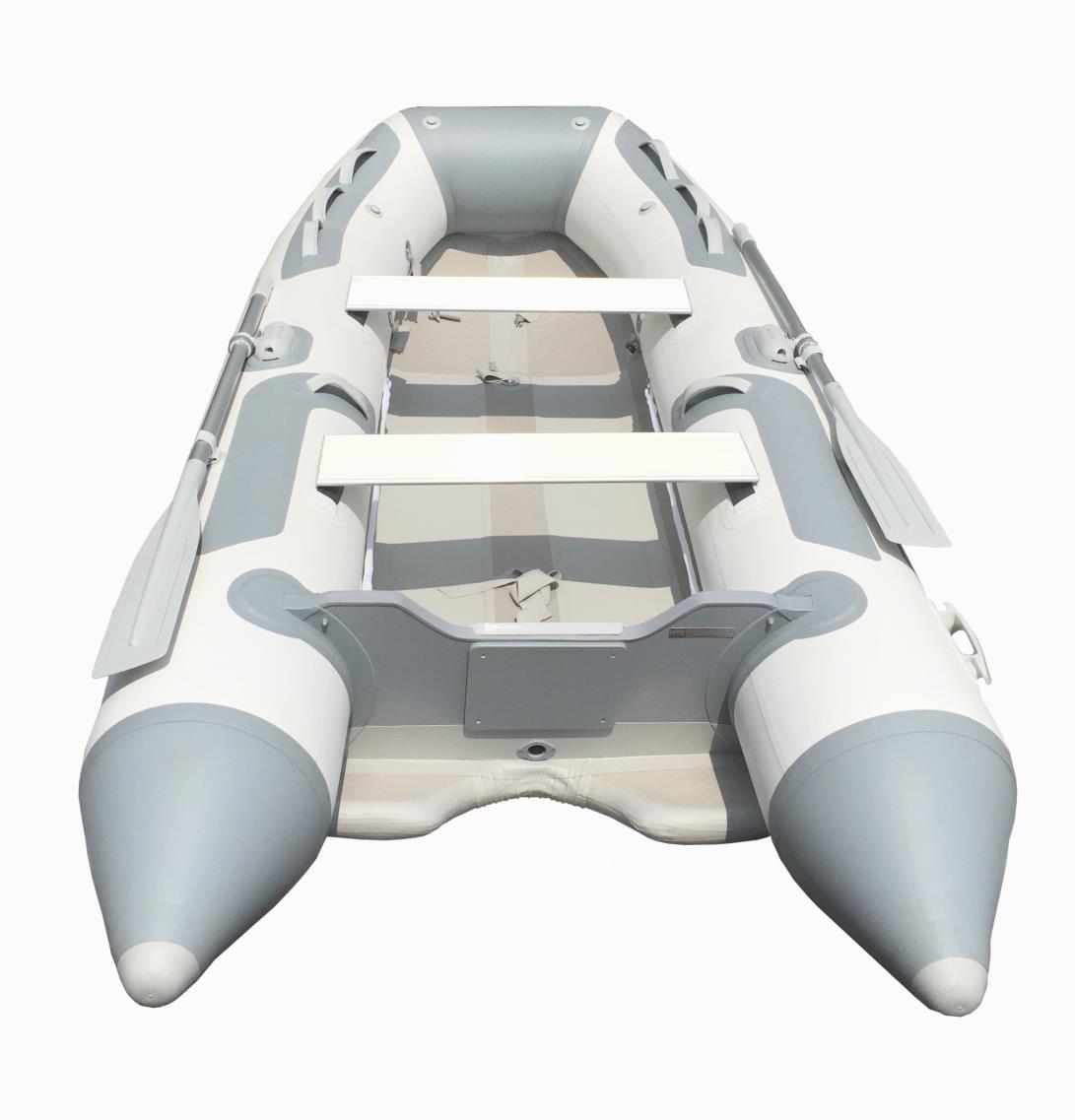 Wooden or plastic deck inflatables use same design with aluminium deck inflatables. The only difference among them is the material of floor plates. Wood and plastics are not considered to be as durable and recyclable as aluminum alloy. Therefore, most of the manufacturers have stopped to produce those floor plates. Most of the wooden deck inflatable boats on markets are used boats. Maybe they are cheap, but there is nothing special to talk about.

Slatted deck inflatables are small and cheap. However, there is one problem. The floor is not comfortable because of the discontinuity. You may not keep fishing buckets horizontal on its deck. 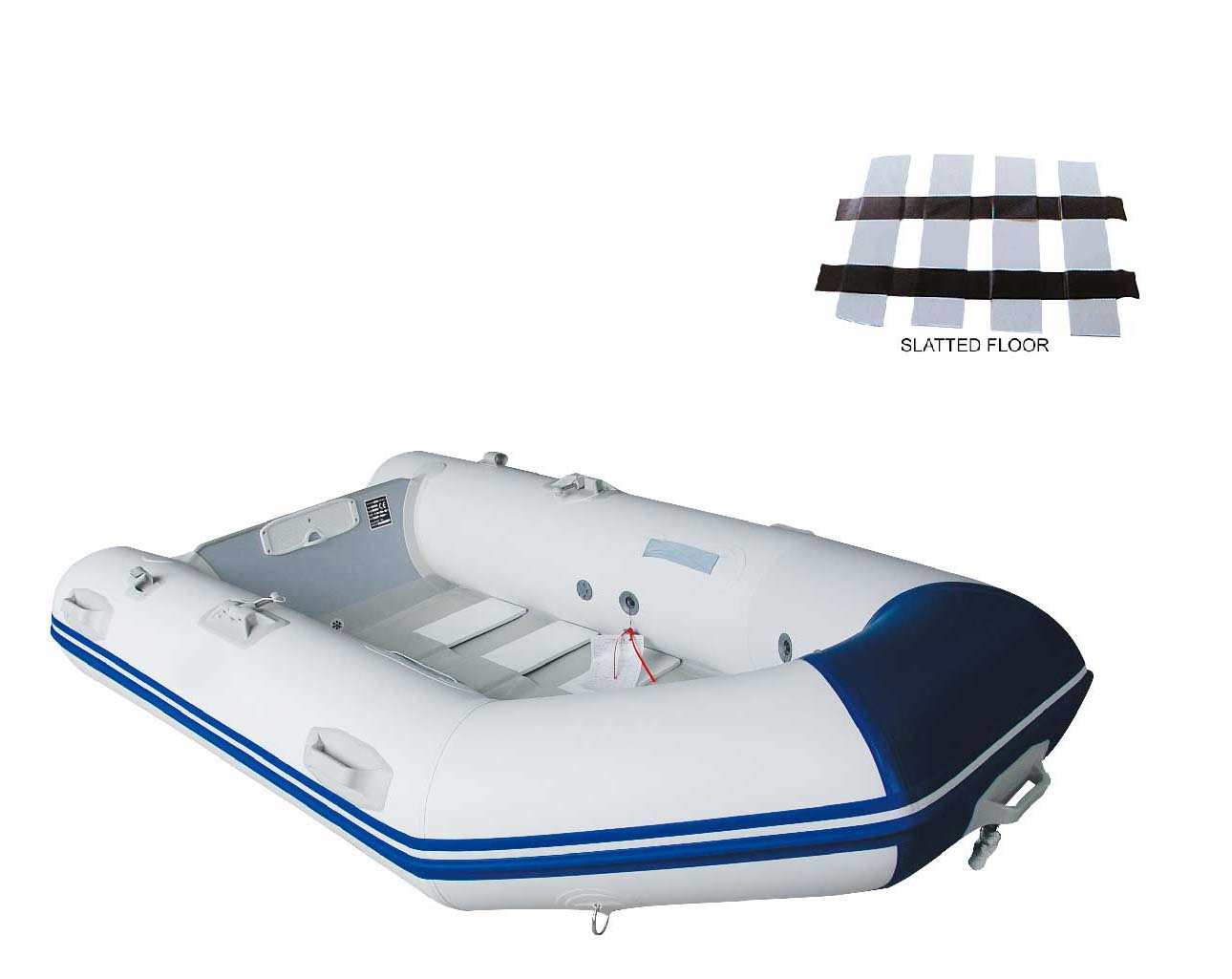 Inflatable kayaks and canoes are the most popular inflatable boats in recent years. The reason is that anyone could buy inflatable kayaks. No matter he has a boat or not. People living in condos could also have inflatable kayaks because they are easy to carry with. Inflatable kayaks vary from design to size. Some single-person types are 50% cheaper and 50% lighter than conventional rigid kayaks. However, there are always high-performance inflatable kayaks which give you more options. You can even install trolling motors or sails on them.

Small inflatable kayaks can be rolled up and put into a backpack. Therefore, you don’t really need cars or trailers to carry with them. You can carry them on an airplane and travel with them to anywhere you want.

When comparing with traditional rigid kayaks, inflatable kayaks have many advantages. Other than their extraordinary portability, they are also easy to fix. Most of the inflatables use PVC as the major material. If PVC is scratched and opens a wound, we could just glue on another piece of PVC. However, if a conventional rigid kayak has a leak, depending on the size, it may not that easy to fix.

In short, maintain a boat require a lot of space, money and time, but have a kayak do not need that much. That is the reason why inflatable kayaks are popular. 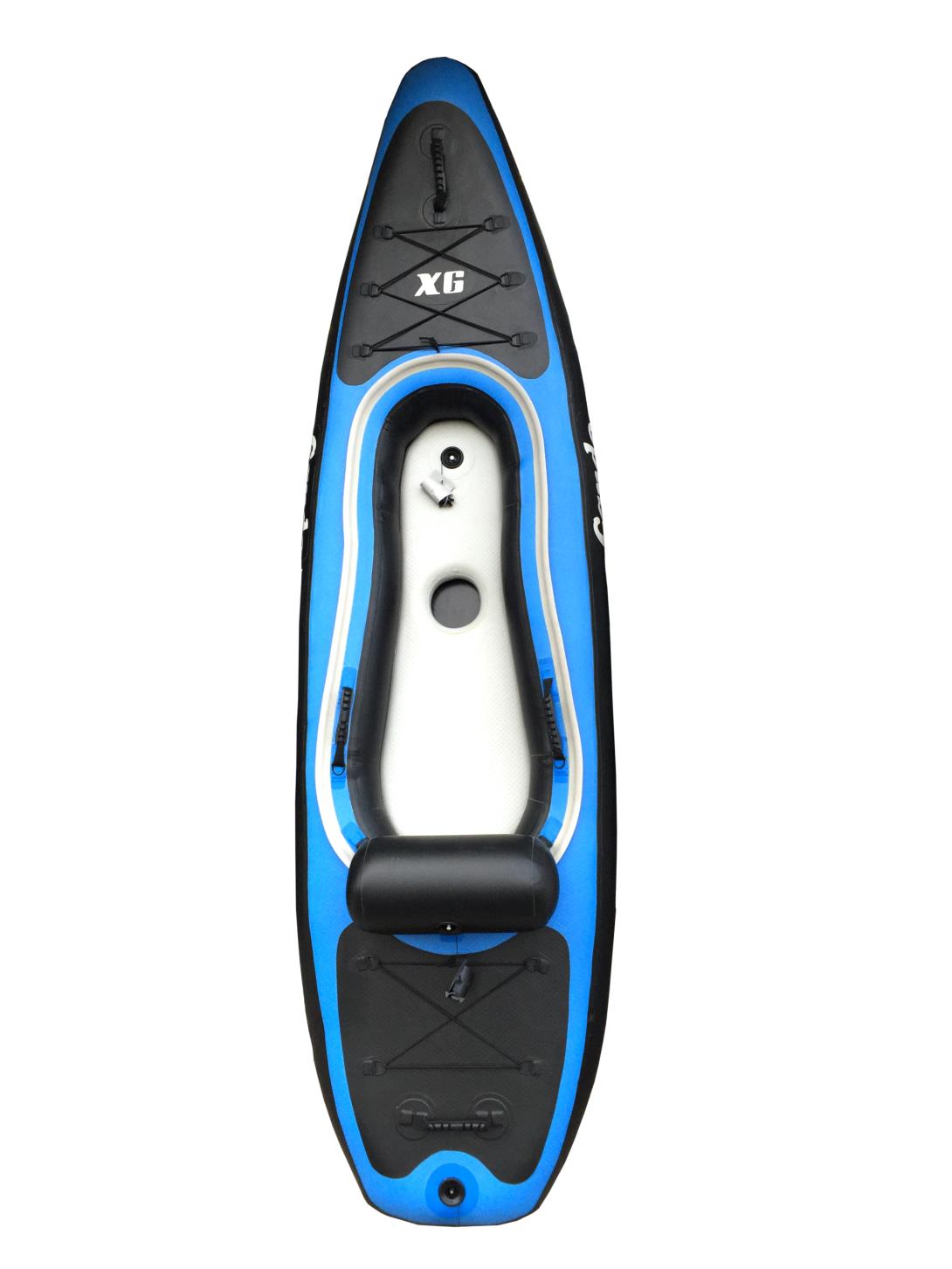 Multi-Hull inflatable boats use inflatable tubes as hulls. Those tubes contact with water and support the weight. Usually there is a hull on each side of the boat. Other supporting frames are constructed on the hulls.

A multi-hull inflatable is extremely stable on water and it is not easy to flip over. However, its stability also causes the boat hard to turn.

Multi-hull inflatables are not very big, which can usually hold 1-3 people. They are most used as fishing platforms or even dock extends. Therefore, they are also called “Inflatable Pontoon Boats” sometimes.